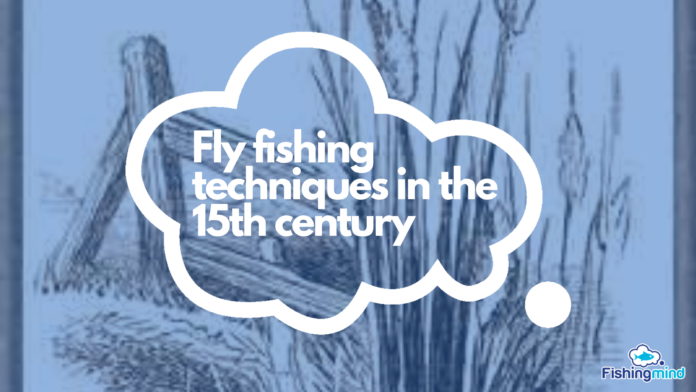 The truth is that we know very little about how people fished a fly prior to the seventeenth century. We can extrapolate to some extent from our knowledge of the equipment they used; rods fourteen feet or more in length, with a twisted horsehair line fixed to the top of the rod – no reel was used.

The limitations of the equipment mean that is unlikely that fifteenth century fly fishermen used lines much longer than twice the length of their rod.

It is often assumed that fifteenth century fly fishermen cast the fly, rather than letting their line blow at the mercy of the wind, but this is pure speculation, even if it is reasonable speculation. If they did cast, it would have been with a simple “pick up and lay down,” since the false cast wasn’t invented until the nineteenth century. We have no detail on how a fly was fished, and neither do we have a single clue as to whether the fly was fished up or down. It is highly unlikely that we shall ever know.

The majority of fly fishermen were after trout, since salmon easily outclassed the equipment that was available. Salmon were caught on the fly, but it wasn’t common. Imagine the difficulties of playing a fresh salmon on a short fixed line and you will understand the problem.

The field craft advice in the Treatyse differs very little from modern books, the angler being advised to stay out of the sight of the fish as far as possible, and cautioned to avoid even his shadow falling on the water.

We tend to think of the early fly fishing as a clumsy affair, but it wasn’t, unless trout have squeezed in a great deal of evolution in the last five hundred years.

No, fifteenth century practitioners were skilled men and women, who not only caught trout with equipment that we would regard as totally inadequate, but who also caught good trout in numbers large enough to sustain the possibility of professional fishing.

Where the fifteenth century fisherman differed from his modern counterpart was in his dependency on and vulnerability to the weather. Our forebears prayed for enough wind to disturb the surface of the water, and hide their approach from the trout.

And when they had enough wind to fish, they prayed that it blew in the right direction. The day when a fly line could be cast into the wind was centuries away.

In fact, the first mention of casting a fly wasn’t made until 1620, and then it was by Lawson , in one of his more economical moments.

To be fair, every word on fly fishing left to us by Lawson is in the form of footnotes to a poem by John Dennys, a circumstance that must have been fairly limiting for him, and it is a pity that he didn’t write more.

Even the tone of Lawson’s writing suggests that he was an expert fisherman. He advised fishing with:

… a line twice your rod’s length of three hairs’ thickness, in open water free from trees on a dark windy afternoon, and if you have learned the cast of the fly.

What Kind of Grease for Fishing Reels

Greasing is perhaps among the elementary steps for the maintenance of any type of tool. It doesn’t matter if you’re making use of the...

How To load a Spinning Reel

Fishing season is around the corner, and you are probably equipped with the essentials to catch the trophy Blue Marlin this time!  Well, before anything...

How to Cast an Open Face Reel

Open face reels or spinning reels are among the most widely used fishing reels. Their general application, ease of use, and excellent lightweight fishing...